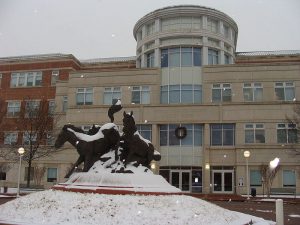 In the turn of the seventeenth century, the Bay was truly a fruitful land. The air was clear, the woods and waters were full of game and fish. The soil was fertile, the climate welcoming. The bay provided hundreds of miles of safe waterways, providing convenient access to vast acres of land. In honor of Elizabeth, the Virgin Queen, The English settlers called the large Chesapeake region Virginia. Jamestown was the Englishman’s first permanent settlement, on the James River, in 1607. In 1632, King Charles I granted the northern parts of Virginia, north of the Potomac River, all the way to Cecil County, second Lord Baltimore. This new grant became Maryland. In March of 1634, the first colonists of Maryland arrived from England aboard two ships called Ark and Dove. Within thirty years, more colonists followed and began settling the southernmost portions of the land we now call Prince George’s County.

Although P.G. County is not often credited for the Washington Redskins, the stadium is located in Landover. There are no other major professional sport leagues in the county, however, Bowie hosts the Bowie Baysox – a minor league Baseball team.

Duck Donuts in Nottingham is giving away free donuts on June 7th, 2019 - National Doughnut Day! "As a brand that originated in the beach town of … END_OF_DOCUMENT_TOKEN_TO_BE_REPLACED